For those of you who have been hiding under a rock or simply turned off the news this past Saturday there was a movement in this country. A call to action, a unification of people from all walks of life to come together for Equality, for human rights for social justice and for change. It was amazing. It was empowering and eye opening. I turn on the news and hear people say that we were dumb, that marching didn’t solve anything, that we were a bunch of whiny people upset over the election.  That women who were born here in the US had nothing to complain about compared to third world countries. And so, to the people not understanding why “privileged women born in the USA would protest” I offer my story.

I was 25 years old when I gave birth to my son. It was a Monday in September and I six days past my due date went to the hospital to be induced. I had a pretty easy pregnancy, only complaint was I couldn’t fit my shoes and my legs were literally trunkles. No lie. I ended up laboring for 24 hours, pushing for two and a half and when my son and I were in distress, labor was not progressing and we were prepared for an emergency Cesarean Section. He was born on the most beautiful Tuesday in the history of the world, weighing in at 9 lbs 10 oz and 22 inches long. Yes, apparently I make demi-gods.

Up until his birth I  worked hard at my hotel and tried to save every penny. I had saved up my vacation to supplement the lost wages during my recovery and hoped for the best. I planned on pumping my breast milk to save on money. Of course as all mothers will tell you, sometimes our birth-plan doesn’t go the way we imagined.

Having an emergency c-section meant that it would take up to 12 weeks for my body to heal from having my abdomen sliced open and a human body pulled from it. I soon learned that my vacation that I had saved up was swallowed up to pay for my insurance premiums and that I did not have the little cushion that I thought I had saved for.  At around 5 1/2 weeks I had to convince my OBGYN to allow me to return to work and beg my managers to put me on the schedule because we just couldn’t afford it. At 5 1/2 weeks I resumed my hotel desk job-a  half a week before a vaginal birth is allowed and several weeks before a Cesarean is cleared. But I had to put food on the table and bills to pay and  doctors visits and co-pays to pay for, I had applied for WIC to help and also for government assistance and I made 10 cents more than I was allowed to make at the time to qualify for any additional temporary welfare assistance. So off to work I went with an open wound. And Guess what happened? My stomach opened up. Literally opened up. Blood, liquids, stuff that should have never come out did (and I had a desk job so it’s not like I was doing strenuous work) being that it opened up I also had an infection that could have killed me. My sons father had to learn in the doctor’s office how to pack the gaping 2 inch hole and change my dressings so it would not get worse, but even through that I would wake up get dressed , partially take my pain medications (If it wasn’t higher than an 8 on a 10 point scale I would go without because I found out that it made me loopy and thus unsafe to drive)  and I went to work, occasionally going home on my lunch break so I could change the dressing and re-pack the wounds.

It would have been nice to have paid maternity leave. It would have been a great help, it would have allowed me time to not only heal but bond with my newborn son. As a first time mother it would have allowed me time to learn the things I needed to learn, to just keep a child alive.  I sadly had to stop breast-feeding/pumping because of the infection and medication and it was all so overwhelming. Looking back I know now that I wasn’t educated or confident or coherent  enough to ask for help and  support for myself a breastfeeding mom, so I had to put him on formula Which you guessed it cost a lot of money and additional stress. However I was lucky to have a job, I am well aware of that.

I do remember something that will stay with me forever, I was asked to help train a gentleman (who to this day is a near and dear friend). He was an older man who had no hotel experience and I was the one who was lucky enough to get to show him the ropes. One day, I had to go talk to our accounting department and happened to see the pay sheets pulled up on the computer and noticed it listed everyone’s wages. To add insult to injury, literally, I realized was training a co-worker, a man,  and guess who was getting paid $1 more an hour with no experience? Yep the man. My guts were falling out, I was a great employee (I am now a Director with the same company, so no, I’m not just saying that) and I was training him with 5 years of experience and I was still getting paid a dollar less. So this friends is why I marched. And even though my baby factory is most likely to be closed forever, I did it for my sisters out there who may or may not have it worse than I did. I do it in solidarity for women’s rights, for equality, for human rights. For dignity. I marched for my Black brothers and sisters, for my LGTBQ friends, for the disabled for the voiceless. I wanted the world to know that until my dying breath, in me you will always have an ally. And I won’t stop here, you will see me in letter writing campaigns signing petitions, calling my local representatives and standing in line in November and every election my body will allow me to attend after that. Because you matter to me and together we are stronger than alone.

For a fun video of the Atlanta March please click here :

EDITED TO ADD: *For the record I believe in paid parental leave for the birth of a child. I feel that a father’s place in the home is just as important and that it is not fair for men in the USA to be punished for wanting to be fathers. I believe both roles are important in the upbringing of a child.

Go out and be awesome, not matter where your walk in life leads you! ❤ 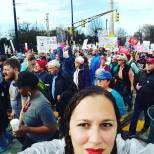 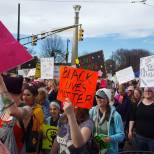 A single mom trying to find her place in the world