So kiddo starts his first day of High school on Monday and im not ready y’all. To explain how not ready I am ill tell you a funny little story about Freshman orientation this past Thursday.

Buckle in guys, because my ridiculous reached a level I didn’t even know existed.

Scene: Freshman orientation. Walking in. I start to feel a little queasy, thinking oh it’s hot. I look around and see all these kids and look at Michael, I start to get emotional. I tear up a little andI say to Michael “This is a little overwhelming” and “you need to be gentle with my heart”
We walk in and Mic is greeting friends, we get schedules and decide to do the list backwards because all the parents seem to be doing the checklist from the top to bottom. We walk down to the gym where he can sign up for clubs. He’s talking it up to the wrestling people and one of the dads is talking to me. I start to get hot sweaty, a little uneasy. I decide to fan myself. Could this be menopause? Nah. Im only 39, it’s because There’s a million kids crammed into this gym, I’m stressed, it’s 90° outside and there’s hot breath talking to me. It was one of those moments where everything he said was a “womp womp womp ” like the teacher from Charlie Brown and all I could feel was my stomach turning and the drops of sweat starting to form on my lower back and forehead. ” Oh no” I thought, “This is a threatcon red situation” still, I’m polite and continue to speak to the dad and watch Michael joke with his friends.
After about 10 minutes I feel begin to feel faint and I excuse myself and go find Michael. I hand him his packet and tell him I have to go find a bathroom and to stay put.
I walk out, now feeling like I’m about to exorcist all over the hallway and think “gawd you can’t embarrass your kid this way, he’ll start freshman year the kid whose mom upchucked in the hallway”

I look around and see the locker rooms, the doors are locked, then out if my mom’s eye I also notice there’s a kid banging on the back door, clearly coming from a practice that can’t get in. I can’t leave him out there. I speed walk to the glass door and let him in, I memorize his face in case I just let in a serial killer and I have to go whoop his ass later for him tapping into my mom heart. He seems innocent enough and looks at me very sweetly with his big brown eyes and overgrown kid body and says “Thank you!” In that out of breath, I didn’t think anyone would see me way.

So back to my emergency, because the gods surely can’t just give me grace for kindness, I realize the damn bathroom is UPSTAIRS. UPSTAIRS! do you know what kinds of motor control it’s going to take for me to pull this off? How many innocent people will be affected if I vomit on the stairs, the trajectory would be miles for sure. I push myself through the crowd and then it happens, I stumble into the bathroom like a drunk girl at a bar, I’m dripping sweat like a faucet, literally, it’s like whatever is inside of me is trying to force its way out by any means necessary and well.. you can imagine the rest except you can’t because at the same time my stomach decides it’s going to go all montezumas revenge and my entire body is betraying me. NOW you can use your imagination on how I handled this in a public bathroom.
I slide onto the floor and pray no one walks in, wipe off the mascara that has now run down my cheeks, dry my face, rinse my mouth, eat 15 mints and pull my shit together because I’m a mom and we have to go meet teachers.
I go back to the gym, Michael’s like 😳 but we soldier on.

A few times I feel like fighting people who think it’s ok to block the hallways. It’s like people get into crowds and forget basic etiquette and it could be that I don’t trust my body at this point so I just want to move as quickly as possible. However, I don’t, because I don’t want to rob Michael of this experience.

Michael is really just beaming and saying hi to everyone. I notice that so far he’s hugged a bunch of football players, band kids, wrestlers, a kid wearing a Harry Potter like jacket that he made himself, big kids, little kids. Every one is unique and im proud of him. His friends represent the good in the world, the beautiful tapestry of humans, the way it should be. 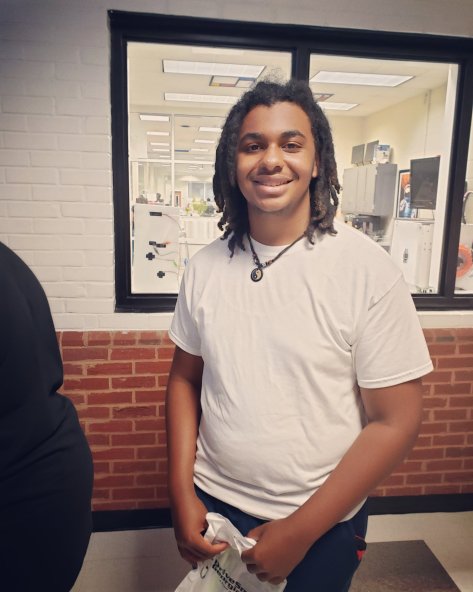 We finish up, he lets me take the obligatory orientation picture that I take every year and he wantsto go by the band room to say hi to his band teachers. We walk in to “MICHAEL!!” and it warms my heart. I see the band director and I just give him an exasperated look and slide to the floor. There is no judgement in band, these are my people now. Ive just recently met them a couple of weeks ago when Michael went to Marching band camp and the transformation I’ve seen in my kid has been amazing. He’s brighter, laughs more, is just more confident, so in gratitude I signed my life up to volunteer for anything and everything the band department needs. I served dinner and sold spirit wear last week at camp and im signed up for concession stands and chaperoning for the rest of my life. I even signed up my parents when they come to visit in September for our birthdays.
One of the band directors talks to Michael about trying out for honor band, district band. Michael makes a comment about “I bet you say that to all the kids” and the band director is like “No, actually I don’t” Michael smiles wide. 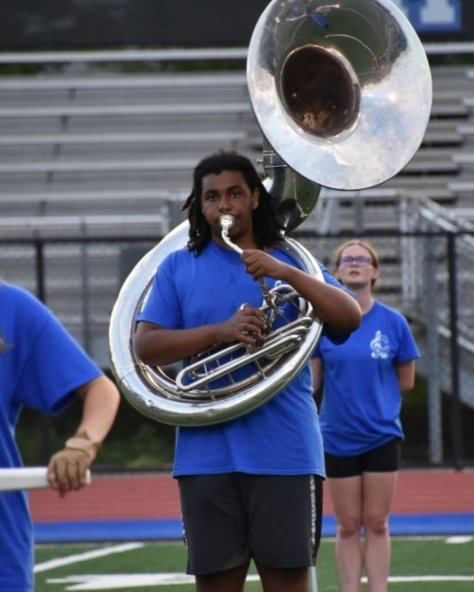 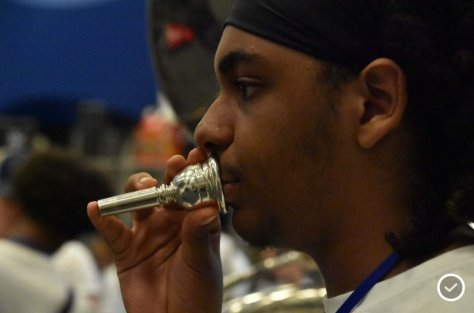 We talk about getting him private lessons, how they come during the school day, and finding a tuba to rent or buy for him to practice with at home. and I make a comment about how I’m gonna have to sell my soul or sleep with someone to pay for it, the band director laughs, says they will figure something out and that in the meantime they will meet Michael in the morning to work with him to get him ready for auditions. I love these people. These people are why I also got a second job starting next week, I don’t want to have to tell Michael he can’t go on a band trip or something because I’m broke.

And then we leave. Michael has the biggest smile and is excited. He tells me that he is going to be fine and that I totally went Beverly Goldberg by throwing up. I tell him it must have been something I ate, he says yeah that mixed with anxiety. Who knows. I know im extra and our baby is going to high school on Monday. (I now know this is a bug as it’s attacked me for 2 days now)

My mother is making jokes about sending me a box of depends when he goes to college because I’m so dramatic. 😂

I shared a shorter version of this story on Facebook and my friends suggested I start a GoFundMe for a tuba. I was hesitant because honestly I hate asking for help. But eventually I caved. Those suckers cost about the same as a small used car.

One of my other friends did find a used one in a store so I’m excited because it makes it more attainable and so I wanted to try and surprise Michael with a Tuba. I know he would never ever ask for one. The kid never asks for anything. That makes me feel bad because I know he doesn’t ask so he won’t add stress to my plate. I sometimes hate that he’s so in touch and aware. But he’s awesome.
So here it is, the GoFundMe for Michael’s Tuba. He wants to try out for District Honor Band. He’s in the marching band and concert band and he’s had the dream of playing the Tuba since he declared it at five. His exact words were “Mommy, I’ve been wanting to play tuba all my life” and I giggled because he was 5.

He obviously was true to his word.

Thanks for reading as always, I appreciate the support. And if you’re so inclined to help, here’s the link

A single mom trying to find her place in the world