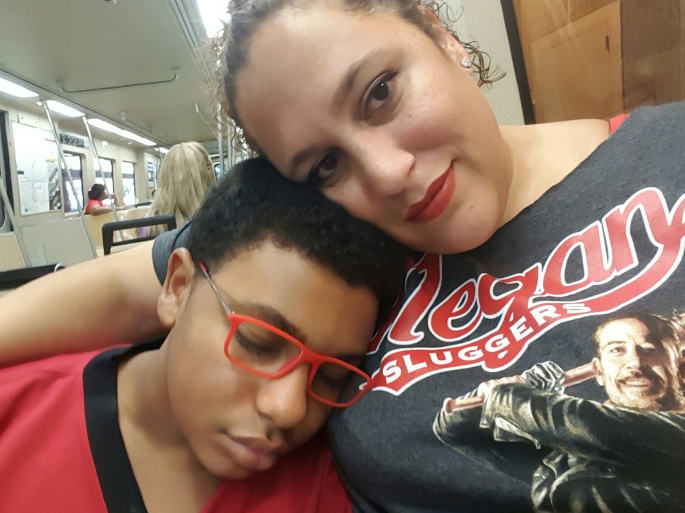 It’s 3:37 a.m and I’m wide awake because I crashed on the couch last night after a long physically and emotionally draining week . I was president of everything yesterday and then I had to come home and cook dinner. Like many times I contemplated ordering out or picking up pre made food at the grocery store.  As I sat at the traffic light i checked my bank account, knowing it would be slim as payday is tomorrow. When i logged in i saw that i was negative again.  Fuck. not an unfamiliar site, but i was hoping a few bills would clear tomorrow, not last night merely hours before my direct deposit hit.  i had to buy Michael some last-minute stuff for school and he lost his glasses. …..again.

As I walk through the door im greeted by “Hi mommy.  I’m starving” a normal thing these days with a growing 12-year-old boy. “Hi baby, I know.  I had to work late today so I’m sorry I’ll fix something in a few.  let me take off my shoes and change” i drag myself up the stairs and sit on the toilet to just breath.

He has no idea that today was particularly hard. I had a VIP meeting at the hotel where our owners attended and had to make sure it went well.  Then the same owners had a cocktail reception an hour and a half after their meeting .  Which meant at work , it was an all hands on deck situation. Not only was I the sales person in charge, but I spent the better half of my day in the kitchen preparing trays of food. Our hotel is small and not prepared to handle a tight turn around so we were all wearing different hats. I was running around so much and trying to figure out how we were going to turn a meeting into a reception with food with limited help in less than an hour and a half and still make it look good.  It was such a chaotic day, I hadn’t eaten breakfast and had to be reminded to eat a sandwich at lunch.  When it was time for me to eat i made myself a grilled cheese and sat down with my friends at work  resting my aching feet for the first time all morning. Then the phone rang. It was Michael’s vice principal,  she was responding to an email I had hastily sent that morning requesting a meeting with her.  Michael had been complaining about a teacher at school who had been telling him and certain children that “They would never amount to anything” or that “They wouldn’t go far in life” and the same teacher had kicked him off the robotics team but didn’t tell him.  When I spoke to the teacher the day prior he actually said he “hated teaching this class”. Michael had tried to handle it himself by talking to administrators but it had gotten out of hand so mom had to step in.  After missing about half my lunch and talking to her, she explained what was going to be done and would follow-up next week. I walked back to the lunch table to finish up my now cold grilled cheese and my engineer, with his thick Jamaican accent  says”Denise, you need to stop stressin’ it’s no good .” I had caught a glimpse of myself in a mirror on my way back to the table and saw that face was red and chest was blotchy.  “I wish i could bud” was all I could say.

After lunch it was a go-go go again up until it was time to flip the room for the banquet.  I have amazing co workers so it went off without a hitch and finally after a 10 hour day I could go home. My dress was dirty from food prep, my hair in a messy ponytail and my feet throbbing . I couldn’t wait to get home and just sit-except i had to make dinner.

I die a little inside. I ask him if he ate yesterday and he replies that he hasn’t really eaten all week but that one day the lunch lady leant him a dollar so he could eat and that he had to pay her back.

I exclaim “a week! I had no idea, i didn’t get the notification. why didn’t you tell me that you haven’t been eating?!”

He responded with ” I’ve just been reading books, I know that you didn’t have any money and i didn’t want to worry you”

and guys if you ever want to know what it feels like to utterly fail your kid and him be completely aware, this is that moment.  He sweetly says “its ok mommy, I just didn’t want to worry you” I died a thousand deaths.

I walk out of the room and pop out his dinner. Making sure he gets a double helping.  I’ll just eat popcorn and I tell him that tonight he can eat in his bedroom watching TV.  He happily runs upstairs. I then stare at the negative account and think to myself  “shit. maybe my mom can let me borrow $10 for his lunch account and how i need to write a thank you note to the lunch lady for using her own money to feed him that day” I know it’s a long shot but i decide to call his father first.  I’m not bashing him today, but in the past it has been like pulling teeth to get financial help from him and I brace myself for the worse. he picks up the phone and I immediately start with “Michael hasn’t been eating this week, i have no money, can you please put money in his lunch account?” let me tell you that this is also a horrible conversation to have, because it is admitting to the other parent that you are not doing as well as you would like them to believe .  He asks for my log in information and puts  $25 in his lunch account. I do the math in my head and realize that is 62 lunches or 31 breakfast and 31 lunches.  that’s a sweet relief for the moment.  i tell him thank you, hang up and tell Michael that his daddy put money in his account. Then i scramble in search of a dollar to pay back the lunch lady .

To say I feel like complete and utter shit is an understatement. I call my mom to explain my shit parenting and she says to tell Michael to let her know if that happens again, that if he doesn’t want to worry me that she will put money into his account.  I have amazing parents but i still feel like utter shit. I should be able to do this at 37. I had just asked her to buy him some sneakers a couple of weeks back with a hopeful promise that i could pay her in instalments. In my heart of all hearts I will but in small increments. She never reminds me or asks for the money and sometimes it’s months before i can even begin to pay. But I’m grateful to have them.  i feel like a failure though as you can imagine.

And so after an emotional and physical day I passed out on the couch.  Food still in my hair and now I’m up with insomnia .  I’m thinking about how to creatively pay bills.  How I’m going to pay my mom back for Christmas because she’s letting me use her as lay away for Michaels gift.  How I’m barely above water.  How i have a broken tooth that needs to be pulled but i can’t do it now.  How i thought the whole time i was fooling Michael into thinking i had it together.  He doesn’t know that for weeks I’ve been working with the YMCA for a basketball scholarship or how the amazing Mom’s at OBM helped me out so he could play.  he doesn’t know what it takes to run the house and family and this week he peaked behind the curtain and saw that the all-powerful Oz was just a tiny human behind the curtain .

Humility is a hard pill to swallow y’all. and now I have to force myself to sleep because we have to be up for school and work in an hour and a half.  please excuse my typos it’s now 4:28 a.m