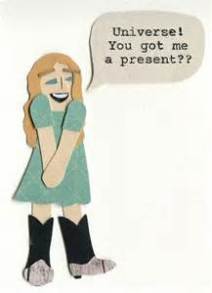 OK so the most happiest thing just happened, Hotel people will understand. We meet thousands of people a week working here and a few stand out good and bad. Mostly bad I’m sad to say. In my 17 years working at a hotel i have only been moved by 2 people. 2 whole people out of millions that stood out. One in 1999 and one in 2011. When i met the guest from 2011- he had come in to plan a party for his wife’s father, as we got to talking i found out he was terminally ill. Mold exposure and it had gotten to his brain. I remember sitting and talking to this guest in the lobby for over an hour and forever being changed by his positivity and humor. I thought about him often throughout the years wondering if he had passed and how i wish more people had his outlook on life. Especially when we get cussed out over beds, eggs and towels on a weekly basis. Face it most humans are poor ambassadors for love and are frankly assholes when they travel. Anyway, this morning I’m helping out at the Front desk and i see a familiar face, he comes up and asks me “Are you Denise?” and i say “Yes” and he says “Not sure if you remember me, I’m ______ i was here in 2011 and booked a party with you” Instantly i light up- its him! My guest who made an impact and i say “Yes! of course i remember you- you and i spoke forever you were terminal and here you are!!” and so he goes into detail about how hes at the Mayo clinic and he’s still terminal but he’s outlived 83 people!” fast forward and hour later and he passing on some more nuggets of humor and stories and all i can think is how amazing life is. This man who is terminal has beaten the odds so far and has the amazing outlook on life and here i am complaining about little things and listening to assholes complain about pillows. However i consider seeing him again a gift from the Universe and i humbly accept.